The following story is an excerpt from Dying to Live: Stories from Refugees on the Road to Freedom by Danielle Vella.

Mariam was thankful to find help cheerfully given on the exhausting journey away from ISIS territory in Syria. She was traveling to Lebanon with her elderly father-in-law and four young children. They left Raqqa with scores of other people, including a bunch of friendly young men who helped the mothers carry their children and their bags. The entire group crept out of the city during the time of evening prayer, when everyone was obliged to attend the mosque, so ISIS would hopefully be unaware of their escape. Mariam says, “Within fifteen minutes, we had to leave the village. No one could make a sound. We ran on tiptoes, carrying the youngest children.”

Within fifteen minutes, we had to leave the village. No one could make a sound. We ran on tiptoes, carrying the youngest children.

After going part of the way by bus, the refugees walked through the night for about nine hours, until they reached an FSA checkpoint. “We waved white blankets in the air to show them we come in peace,” Mariam recalls. She was relieved, especially for her father-in-law, who had nearly collapsed with fatigue just a few minutes before. Everyone sank down gratefully to the floor in a few dilapidated rooms located at the checkpoint, laying their children to rest on mats scattered around the floor. The FSA was checking the families, one at a time.

Suddenly, the group of obliging young men whipped guns out of their backpacks—“We thought they had food and clothes in them,” Mariam says—and opened fire on the FSA fighters. Those few seconds are frozen in her memory: “I reached out to get my daughter and put one foot in front of the other. A bullet hit the ground just at my feet. The sand flew into the air. This is what I can’t forget: the sand going everywhere. If I hadn’t put my foot forward at that very second, I would have been hit.” In the chaotic scramble for safety, “everyone was step-ping on everyone else.” Mariam crawled on her knees to search for her children, who had fallen asleep on the mats, and panicked when she lost sight of two of them. Within seconds that seemed like a lifetime, she found them.

Mariam and her traveling companions surmised that the young men came from ISIS. Her experience reveals the dangers of the journey facing Syrians who fled their homes and passed through a country carved between warring groups. Mariam made it, and the events she relives seem a world away from the mundane quiet of her rented flat in Beirut, where she is “so happy” because she feels secure. When I re-mark that she has a knack for vividly describing what she went through, so much so that I can picture it, Mariam says, “It was very hard. That’s why I remember the details.”

It seems her son remembers them too. No more than ten years old, he sits silently next to Mariam on the sofa. When she describes the shootout, he pipes up to say that a nine-year-old boy was shot dead in the fracas. They buried him under the olive trees, and his mum found him before she went back on the bus and she cried. Mariam’s son goes on to share another memory from that trip: at the second FSA check-point, a teenage boy was found with a picture of ISIS leader Abu Bakr al-Baghdadi on his phone. This was a fatal discovery: the FSA executed him there and then.

Mariam elaborates: “We went by bus to the next checkpoint, and they searched us again, and this is when they found the boy, he was about fourteen years, with the picture of Baghdadi. They tied his hands behind his back and told him to walk to a sand dune they had created as a shield. Then they shot him dead.” Did Mariam actually see this? “Oh, yes, we both did, didn’t we?” she says, turning to her son and ruffling his hair. “We were on the bus and it was turning around just as the boy was walking up that hill. By the time the bus reached the road, they had shot him. He was just a boy traveling alone; I sat next to him on the bus. He said he had deleted all the pictures he had of ISIS, but he must have missed this one.”

In a country like Syria, ravaged by pervasive conflict, life comes very cheap. One warring party frequently views with misgiving those moving from the territory controlled by another. If the combatants decide that their fears might be justified, mercy appears to be in short supply. Their suspicions are not always groundless, as the shootout proved. But most of the refugees just want to find a safe place, and the mistrust they face on the way is irksome, insulting, and sometimes even dangerous.

One warring party frequently views with misgiving those moving from the territory controlled by another. If the combatants decide that their fears might be justified, mercy appears to be in short supply.

Mariam experienced something of this when passing through territory held by Kurdish fighters to get to Damascus. Everyone alighted from the bus at the checkpoint, and the driver was ordered to proceed to the next village and to wait for his passengers there. Some eight hours passed, and those manning the checkpoint did nothing but smoke and drink coffee, leaving the families to wait and wilt in the heat. Mari-am’s view: “They just wanted to keep us waiting because we are Arabs and they are Kurds.” But this was unacceptable to Mariam because her children were hungry and thirsty, and she could see that her baby daughter was very unwell. She recalls, “I had powdered milk but no water to mix it with. I asked for water but they did not give me.”

Mariam singled out a tall and broad-shouldered man who looked like he was in charge, wearing sunglasses and with a cigarette dangling out of the corner of his mouth. She dispatched her father-in-law to plead with him. No such luck: “He started shouting and swearing and told my father-in-law to shut up.” So Mariam plucked up courage and went herself, carrying the baby in her arms. She told the man, “Our children have not eaten since yesterday. May God be with you; please let us pass.” He looked at her closely and barked, “Pass!” The relief comes back to Mariam’s face when she remembers that moment. To hear her talk about the village they went to, you would think she had found a five-star hotel, so great was her delight. “We found water and food for the kids, even slides and swings for them to play. We bought sand-wiches, we washed, and we made milk for baby.”

Once they reached Damascus, Mariam’s husband, who was anxious-ly waiting in Lebanon, arranged the last leg of their journey with a smuggler. They entered Lebanon illegally because it would have been too expensive to do otherwise. At the border, the smuggler instructed them to run from his car toward the mountains, where they found hundreds of people about to cross together.

The trek was tough. “It was not like this,” Mariam says, holding her fingers stiff and inclining her straight hand to indicate a slope. “It was like this,” and her hand flips to vertical. “We spent two hours going up and down, walking in a line, one in front of the other.” A handful of smugglers, wearing wide-brimmed hats to shelter their faces from the blistering sun, accompanied the group. The way down was harder be-cause it was so steep. One of Mariam’s sons fell and rolled out of her sight down the slope. A smuggler, whom Mariam estimates was about eighteen years old, reassured her that the boy would be fine. He raced down, picked him up, wiped his face clean, and told Mariam, “See, don’t worry. He’s OK!”

Meanwhile, Mariam’s eldest son kept darting off. She smiles at the memory: “He was not being disciplined because he kept running ahead to see if he could spot his dad. The smuggler ran after him to bring him back to the group.” Mariam’s husband had been working in Lebanon, and his family had not seen him in two years. She says, “I was motivating the kids to continue walking by telling them that when they went down, they would see their father.” Sure enough, her husband was waiting for them on the other side of the mountain, with a car borrowed from a friend. This is a story with a happy ending: “The journey took us one week and one day. We arrived safely and I will never go back.”

Reprinted from Dying to Live: Stories from Refugees on the Road to Freedom (copyright 2020) by permission of Rowman & Littlefield Publishers Inc. 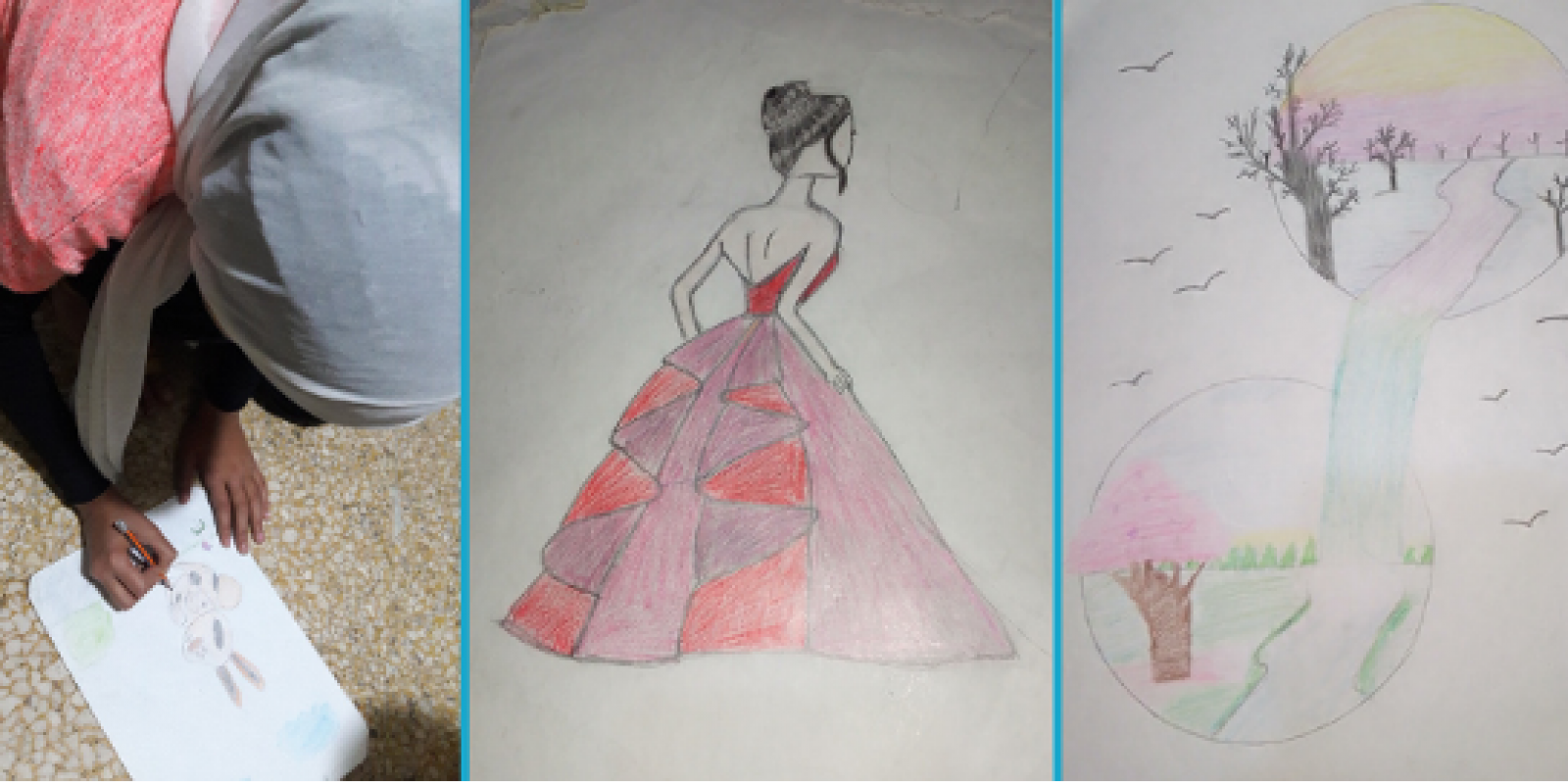