What is your vocation story? What brought you to the Jesuits and to work with refugees? Do you have a “cannonball” moment?

The middle of that was a long weekend pilgrimage to El Salvador. It was now my second time in Honduras in one of these trips. I think the faith and vocation piece were both present there.

Just talking and hearing people’s stories and talking to them about how important, how hopeful, and faith-filled they are [inspired me].

I think that eventually led me to becoming Catholic and then a Jesuit. I didn’t go to Georgetown thinking I was going to be a Jesuit. I had thought about becoming Catholic. It happened in my first year as a freshman. As I began to think about it — as I honed in on my major within the School of Foreign Service — and looking at regional studies, I was really just interested in issues of justice and development in places like Honduras.

It brought back these memories of these Jesuits in El Salvador. Then drew me to the Jesuits at Georgetown who were also doing that in their own way, their own particular studies, or through campus ministry or whatever or seeing it in my high school as well, how their vocation also had this real closeness and commitment to working with those and accompanying those in the margins.

What drew you to work for JRS? 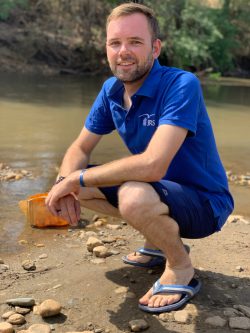 I studied in Jordan. Amman was great. I lived with a host family. I think one of the more fulfilling things was when I was working with JRS doing English classes. This was pre-Syria Civil War. Syria kicked off in 2011. I was there fall of 2011 in Amman. The JRS office eventually would explode and would have the big camps in Jordan and so forth. That office was housed in the Jesuit retreat centers or the Jesuit center of Amman. Then I would go to a school where we would meet and we’d do reading, an intermediate level reading.

It was fun. That got me outside of the academic stuff that was going on, working on Arabic, but also it just felt like the most natural thing to do. It was easy to get plugged in a very little way. I could be of some help as a volunteer.

Matt served with JRS South Sudan in Maban from 2019 until 2021. He is now completing his theology studies in Paris, France.

I think one thing that excites me about Paris is the JRS presence and working with urban refugees. For a couple of friends who have done some work with them in recent years, it sounds really easy to get into. I think that’ll be whether a formal part of my ministry, like apostolic work while I’m in Paris, or informal, it’ll somehow be taking shape.

I think my time in Maban was immensely rich and fulfilling, challenging. Working with an organization that I’ve come to really value and see like, “Wow. This is something I could see myself doing in the future and after when I’m hopefully ordained a priest and down the road.”

Is there something from the life of St. Ignatius that you draw on in your work for JRS?

One is just like this idea of finding God in all things. I think Ignatius’s pretty impressive ability to encounter God and recognize God’s movement and how the spirit is moving within people or within a particular context.