“It is a success for me that people are listening to my story and refugees are being heard,” said Mina, a student at Arizona State University and a participant in JRS/USA’s annual Advocacy Day that took place on April 5th. 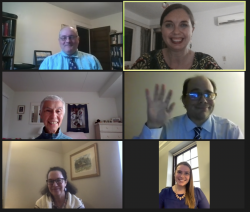 the U.S. Congress. She described her tense, rushed evacuation from Afghanistan last summer. Since then, she has passionately worked for reform surrounding refugee resettlement and for the rights of Afghan women.

Through Zoom, participants joined in from Egypt to California, representing 24 states and the District of Columbia. Advocates were divided into groups based on representatives and met with over 90 Congressional offices. Together, they addressed restoring asylum, passing the Afghan Adjustment Act, and increasing support for refugee education.

Esther Ngemba, a student at John Carroll University, is no stranger to advocacy work. She has previously lobbied on Capitol Hill and spoken before the United Nations about refugee rights. “Being a former refugee myself, I love the opportunity to advocate for my fellow refugees,” she said.

Being a former refugee myself, I love the opportunity to advocate for my fellow refugees.
Esther Ngemba, a student at John Carroll University

Ms. Ngemba also reflected on the power and importance of storytelling when meeting with political leaders. “I can do policy all day,” she laughed but then explained how it is not enough to only understand the legislation at hand but also, “it’s how you bring the story to the table and say this is why we need this policy.”

After many meetings with her Ohio representatives, she often recognizes the individuals meeting with her as they have formed a relationship. She sees these relationships as integral to implementing the policies she advocates.

“They really want to meet with their constituents,” said Elena Habersky. She’s a graduate of the University of Scranton and works in the Center for Migration and Refugee Studies at the American University in Cairo. Ms. Habersky was grateful for the virtual format as she was able to reach and talk with her Pennsylvania representatives via Zoom in Egypt.

Her group was made up of nuns, educators, retirees interested in social justice issues, and an individual who is from Afghanistan and has lived in the U.S. for 15 years. Ms. Habersky explained how Advocacy Day brought this group of diverse people together, united in a common goal.

She spoke of the passion that emanated from her group even though not everyone was necessarily an “expert” on the three issues talked about.

You don’t have to be an expert, you just have to care.
Elena Habersky, Center for Migration and Refugee Studies at the American University