I was a freshman at Walsh Jesuit High School in Northeast Ohio when I first saw the picture of Alan Kurdi lying face down on a Turkish beach, his body soaked from the salt water. He, his brother, and parents were fleeing Syria on a raft that capsized. His father was the only family member who survived.

To use an Ignatian term, I was forever ruined for the better. My ignorance of forced displacement demanded mitigation. No longer could I walk the halls of my high school not knowing how many refugee children could not access lifesaving education or how US politicians make important decisions about the level of dignity and humanity with which Americans welcome refugees.

To use an Ignatian term, I was forever ruined for the better. My ignorance of forced displacement demanded mitigation
Chloe Gunther

I started looking into local refugee resettlement agencies, hoping to get involved. This search, and a forwarded email from my father, led me to JRS. As I attended a high school rooted in the Jesuit tradition, it was the perfect opportunity to establish a group on campus dedicated to advocating, accompanying, and serving refugees. 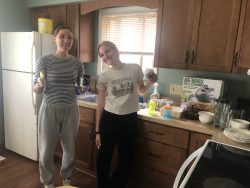 Fast forward seven years, with dedicated student leaders and supportive teachers, the group has sustained. Jessica and Madelyn are the current president and vice president and continue leading the group to advocate, accompany, and serve refugees.

I recently called the two leaders, who picked up from a car parked in the senior lot as they worked on a pros and cons list for Madelyn’s college options.

Earlier that week, on November 14th, the Action Team had hosted a celebration and advocacy event on their campus in honor of JRS’s 42nd Anniversary. Throughout the day the JRS club hosted a lunch time letter signing campaign, an opportunity to send postcards to refugee children, and a moment of prayer for people forced to flee their homes.

During lunch periods, they sat outside of Walsh Jesuit’s Campus Ministry office with a petition to end Title 42. They paired this advocacy effort with an informational video to help students understand the importance of ending Title 42.

When Jessica went to her history class later in the day, she was encouraged when a student raised their hand asking, “what is up with Title 42?” She said that led to a class discussion about the policy with help from their teacher to understand its historical roots.

When Jessica went to her history class later in the day, she was encouraged when a student raised their hand asking, “what is up with Title 42?” She said that led to a class discussion about the policy with help from their teacher to understand its historical roots.
Chloe Gunther

To end the day, Jessica and Madelyn led the entire school through an Examen prayer that focused on the experience of refugees.

In addition to educating their school community, the JRS Action Team has also committed to accompaniment. At the beginning of the school year, they helped prepare an apartment for a refugee family resettling to Northeast Ohio from the Democratic Republic of the Congo. Before their day at the apartment, the club hosted a toy drive as the family has young children and they hoped to create a fun, welcoming, and comfortable space.

The group is looking forward to developing and expanding their accompaniment work. Most recently, the Action Team joined the Migrant Accompaniment Network through the Caminar Contigo program. This program will help connect the group with migrants relocating near their neighborhoods in Ohio.

Madelyn said that the JRS Action Team has been a way for students to connect their passion for service with a life of faith and the Jesuit mission. For her personally, it has helped broaden her understanding of what it means to be a person of faith.

As Jessica and Madelyn prepare to graduate this spring, they are working on strengthening the next round of leaders to make sure Walsh Jesuit continues to stand with refugees.

So, I ask you, allow yourself to be ruined for the better. JRS/USA offers a variety of educational opportunities on forced displacement. Get involved, take action, and join myself, Jessica, and Madelyn as we accompany, serve, and advocate for refugees worldwide with JRS.


Global Update: The Status of Education for Girls in Afghanistan 25 Jan 2023