If you were to look out towards the Santa Fe International Bridge, the bridge that connects El Paso, Texas to Ciudad Juárez, Mexico, you might notice a series of images posted along the wall of a nearby canal.

In one photo, a man carries a young child, the face of the toddler tucked into the man’s neck. In another photo, groups of people can be seen standing together with homemade signs, #EndTitle42 pasted across each image. The photos are in black and white but the red shirt of each individual is illuminated in color.

March 21st, 2022 marked two years since the implementation of Title 42, a Trump-era public health order used to expel migrants seeking humanitarian assistance at the US/Mexico border. Part of the 1944 Public Health Services Law, Title 42 allows the U.S. government to keep people from entering the country in order to stop the “introduction of communicable diseases.” At the beginning of the COVID-19 pandemic lockdowns in March 2020, the Trump administration used Title 42 to prevent hundreds of thousands of people from seeking asylum.

To raise awareness on the anniversary, groups in Ciudad Juárez gathered to speak out about how the policy continues to affect their safety, security, mental and physical health, as well as their right to migrate. The installation of photos was established by JRS/USA and JRS/Mexico working in partnership with the HOPE Border Institute, SJM, and CLINIC. 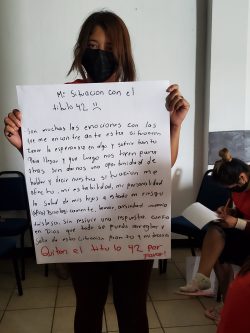 At the Alabanzas Al Rey shelter in Ciudad Juárez, JRS/USA and JRS/Mexico met with a group of women to learn more about how Title 42 has affected not only their well-being but their children and families as well.

“We walk in fear here,” one Honduran woman said as children played in the background. She spoke of how food insecurity, a lack of protection from violence and illness, and the separation between relatives have contributed to her sense of fear.

On a handmade sign, another participant explained how the implementation of Title 42 has affected her quality of life. “My stability, my personality, and the health of my children have been at risk. Psychologically I shake, have anxiety, insomnia, [and] sadness without receiving any answers,” part of the sign reads.

My stability, my personality, and the health of my children have been at risk. Psychologically I shake, have anxiety, insomnia, [and] sadness without receiving any answers...

As any restrictions lingering from the pandemic continue to be dismantled, Title 42 has yet to be fully eradicated. JRS/USA has actively advocated for the removal of this policy and has most recently signed a letter urging the Biden Administration to stop the expulsion of asylum-seekers under this policy.