For the second-straight year, digital advocates including participants from Jesuit universities, high schools — as well as faith and education-focused non-profits — took to their laptops, cellphones, and video chats to push for critical protections in US policy on refugees, asylum seekers, and displaced persons.

The day firmly embodies a cornerstone of the mission to accompany, serve, and advocate for millions around the world at the highest levels of US government and policymaking. In years prior, advocates had dispersed across Capitol Hill in Washington, DC to engage face-to-face with US Congressional representatives and their legislative staff.

This year, nearly 100 participants hailed from 25 states — including the District of Columbia — representing 65 total districts in a day-long marathon of 95 meetings with legislative offices.

Voices in chorus can change lives. Today on #JRSAdvocacyDay, we are taking action for displaced persons around the world. We ask all elected leaders to stand up to protect asylum, support humanitarian aid, and restore refugee resettlement. #jrsadvocates #santegidio @jrsusa pic.twitter.com/IviNQjYmSN

“It was such an honor speaking on behalf of JRS and the entire asylum and refugee community today,” says Magdalena Dutkowska, an undergraduate student at Fairfield University. Dutkowska met with the offices of Sen. Chris Murphy (D-CT) and Rep. Jim Himes (D-CT).

In a year shaped nearly in-full by the COVID-19 pandemic, asylum seekers and refugees have received some of the harshest restrictions by governments around the world, including the United States.

JRS advocates, in turn, used their digital platform and access to explicitly denounce Title 42 expulsions, a federal health provision which limits asylum seekers from entering the US due to the virus.

“We know it is possible to both welcome those seeking protection and ensure that the spread of the disease is stopped,” says Giulia McPherson, JRS/USA Director of Advocacy and author of a new JRS policy brief on COVID-19 implications on government asylum policies.

The paper was circulated to offices and advocates ahead of April 15 meetings. 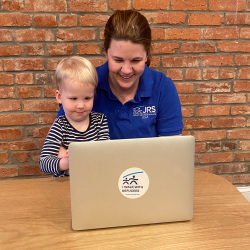 Fr. Michael Sparough, SJ, based at Bellarmine Jesuit Retreat House in Barrington, Illinois, echoed the call to advocate and put his own beliefs into practice. “As people of faith,” he says, “we share a common belief that it is critically important to advocate for those who are most at risk among us.”

McPherson indicated that there had been “strong commitments to cosponsor the GRACE Act” a bill which would raise the US annual refugee ceiling to 125,000 minimum, from Rep. Jamie Raskin (D-MD) and Rep. Paul Tonko (D-NY), among others.

Thanks to the office of @SenatorFischer for meeting with some @Creighton community members on this #JRSAdvocacyDay!

We look forward to the continued collaboration and conversation on the rights and dignity of refugees and migrants. @jrsusa #JRSAdvocates pic.twitter.com/HJPrGMYPcC

Ultimately, the arc of collective advocacy efforts bends towards greater protections, dignity, and opportunity for some of the most vulnerable persons in the world.

For Silvia Muńoz, an advocate and Cuban immigrant who has lived and worked for over 60 years in the United States, the efforts are profoundly personal.

“[I] arrived, unaccompanied, in 1961 and was welcomed with open arms to this country, it pains me to see the animosity against immigrants and asylum seekers, even from fellow immigrants,” she says.

“Thanks for the opportunity to advocate for refugees. I pray that our stories and advocacy do make a difference in future policies.”

If you missed JRS Advocacy Day 2021, you can still take action with JRS/USA.