November 14th marked the 42nd anniversary since Pedro Arrupe, S.J. started Jesuit Refugee Service (JRS) in 1980. The global JRS community, from a high school in Northeast Ohio to a refugee camp in Northwest Kenya, gathered to celebrate and honor 42 years of advocating, accompanying, and serving. 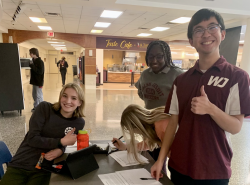 In Cuyahoga Falls, Ohio, Madelyn and Jessica, the co-presidents of Walsh Jesuit High School’s JRS Action Team. The group hosted a day-long event complete with a lunch time letter signing campaigns, postcard writing to send messages of hope and solidarity to refugee children, and an end of the day Examen prayer with a particular focus on refugees.

Later that evening, Joan Rosenhauer, the Executive Director of JRS/USA began the virtual Walk with Refugees event, videoing in from the JRS office in Bogotá, Colombia. With gratitude and pride, she said this was a day to “honor every staff member, refugee, sponsor, and advocate who carries JRS’s mission of accompanying, serving, and advocating for people forced to flee their homes.”

From Colombia the celebration traveled, virtually, to a JRS shelter in Quito, Ecuador. There, the Director of the JRS shelter, Ximena, talked about the relationships she has built with families living in the shelter.

“This is a place of reconstruction…an opportunity to fly again,” she said. The shelter provides food, healthcare, and access to education for families.

This is a place of reconstruction...an opportunity to fly again.
Ximena, JRS/Ecuador Director

JRS Ecuador also facilitates a livelihoods program that helps refugees start their own businesses through skills such as hairdressing, jewelry making, and baking. Ximena explained that entrepreneurship can empower people to keep following their dreams.

Then, the International Director of JRS, Thomas Smolich, SJ, joined the event from outside St. Peter’s Basilica. He called to mind how Pope Francis says God’s kingdom needs to be built with refugees and migrants. The Pope’s call is a great reminder of Pedro Arrupe, S.J.’s mission in starting JRS which was honor refugees as God’s children by being there to accompany, advocate, and serve.

After a beautiful musical performance by a music teacher in Washington, D.C. who is also an Afghan refugee and his student, Fr. Jim Martin, S.J. talked about his experience in Nairobi, Kenya where he worked with JRS between from 1992 to 1994. He recalled how the refugees he met and worked with were some of the most hopeful, joyful, resilient, and faithful people he has ever encountered. He then introduced Martha, a counselor in the Kakuma refugee camp.

Martha works primarily with children who live with developmental, cognitive, and physical disabilities. Through JRS training programs she is certified in different areas of mental health, counseling, and child protection. A refugee herself, Martha came to Kakuma in 2011. She was born in South Sudan and forced to flee due to conflict

Martha was identified by a colleague as the “the link between the people and JRS.” She understands the refugees in the camp and how JRS’s programs can meet their needs.

Before the celebration came to an end, four-time Grammy winner, Renee Fleming sang about living with a clarity of heart, sharing that “the gift to be simple tis the gift to be free.”

Joan Rosenhauer closed out the virtual event with a reminder that the driving forces behind migration are not simple, but they are not impossible to overcome. Jesuit Refugee Service is ready, with the help of staff, refugees, sponsors, and advocates, to take these challenges on. 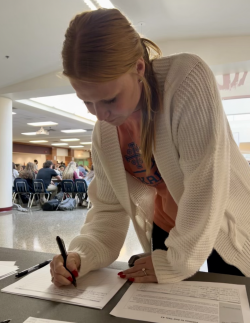 The national and international JRS communities are integral in this process. Throughout the day, other campuses raised awareness about JRS and displacement as well. In Seattle, the JRS Action Team at Seattle University kicked off a month-long winter clothing donation drive for migrants leaving the Northwest Detention Center in Washington.

As the sun set on November 14th, students at St. Louis University hosted a vigil for all people who have been forced to flee their homes. Michael Schreiner, a Campus Minister at the university, said he and his students were intentional in pairing prayer with action by including the opportunity for students to sign letters to representatives in support of mental health care for refugees through the MINDS Act.

The day long and world-wide celebration of 42 years of Jesuit Refugee Service on Monday served as a reminder of the tremendous connection and care throughout the global JRS community. This momentum and support will help create more places of reconstruction and opportunities for people to “fly again”, as Ximena suggests.

Click here to learn how you can get more involved. Follow this link to learn how to start a JRS Action Team in your parish or campus community.