As part of our commitment to accompany refugees displaced by climate and extreme weather around the world, join the JRS/USA #ClimatePush.

“It seems like so long ago,” says Matt Ippel, a Jesuit scholastic and former JRS South Sudan volunteer in Doro Camp, as he reflects on the fall 2019 rains that refused to cease.

“The flooding started — I remember the first flood and water entering our compound, but in a very mild way, in the middle of August,” he says.

Then, in the early days of October, came the torrents from the banks of the Blue Nile River — one of the two major tributaries of the iconic northbound river.

In a hurried frenzy, Matt and the staff in-country awoke to “their gumboots floating in the room,” while everyone began to move their belongings to higher ground.

It was all hands on deck.

As water inundated Maban County — an area home to over 160,000 displaced persons across multiple refugee camps — the JRS team quickly adapted to the waterlogged terrain.

“We kept trying to see how high the water level was and seeing if it was decreasing, so we could move people to the UNHCR office compound for some staff who were able to be evacuated temporarily as the water subsided.”

In recent years, the Nile River has experienced flooding unseen for over a century, transforming often life-giving rivers into a force for calamity in areas where war and famine have already displaced hundreds of thousands.

In 2020, over 1 million people (about the population of Delaware) were flood-affected in South Sudan, including 481,000 displaced persons across 43 separate counties, according to the United Nations Office for the Coordination of Humanitarian Affairs (OCHA). 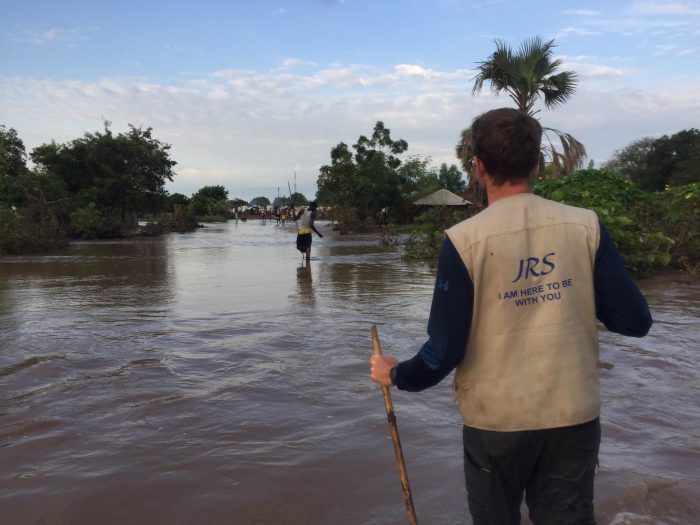 Matt found that the team’s approach of continued accompaniment was key to a successful response. JRS supported life-saving interventions led by the local government and UNHCR and restored  psychosocial support services and teacher training programs three weeks after the severe flooding.

“I think this is what struck me is we’re not a World Food Program (WFP),” he says.

What makes our work unique and adds a particular flavor or I think really gets to the essence of who we are is our closeness with the people.
Matt Ippel, SJ

Some of the villages are about 20 kilometers away — on a normal day when the land is dry — it takes nearly two hours to arrive. After the flooding, the journey took over 10 times as long  — averaging about 24 hours.

In the aftermath of the flooding, JRS supported advocacy initiatives at the local and global levels, including directing further resources to migrants and refugees impacted by climate change.

“The term refugee is so clearly defined [by the 1954 Refugee Convention],” says Matt, “yet at the same time I think it limits the people who are displaced for other reasons that don’t fall under that description or definition for most half a century ago or so.”

Unfortunately, people displaced by climate and weather events don’t have the same protections – many will not have the same rights to seek asylum or refugee status as the global infrastructure to support them does not yet exist.

As we further explore climate migration and the limits of the international definition, revisit an Earth Day 2021 overview from JRS/USA Board Member Susan Martin.