JRS Romania: “The first need is to welcome these people”

We interview Marius Talos SJ, Director of JRS Romania since 2013.

What is the situation in Romania before the outbreak of the war in Ukraine?

We find ourselves in a situation that we did not imagine two weeks ago. Faced with this tragic surprise, we want to make the maximum effort to find a minimum support for those millions of displaced people.

Due to its vocation, JRS Romania is not an emergency organization, so we had to improvise essential assistance in terms of food, clothing, mattresses, medicine… And, at the same time, we have to ensure accommodation and legal advice for those who want to seek asylum in Romania. We must bear in mind that the average number of asylum applications annually is around 6,000, while this year we have had 3,200 in two weeks. It is something we never had in Romania.

What needs do people who are arriving at the border have? What is the work that JRS does?

There are three stages in this assistance.

The first need is to welcome these people, who have spent more than two days before being able to cross the border (Romania shares a 650 km border with Ukraine).

Then you have to find how to meet the needs of food and accommodation.

It is winter, with very low temperatures, below zero, so there is also a great need for warm clothing. Then medicines, personal hygiene and sanitary items. It is necessary to ensure a minimum heating for them and they must be assisted at a legal level to continue the journey, to request asylum in the country, which is requested by less than 10% of the population that passes through Romania.

And it is also necessary to provide psychological assistance for people who have experienced unimaginable trauma. Mothers with children and babies who will never be able to find their husbands or fathers. You have to assure them of assistance. 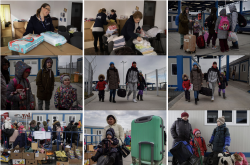 In addition to Ukrainians, refugees from other countries are also fleeing the country and arriving at the border.

Yes. We have to distinguish between refugees from Ukraine and Ukrainian refugees, because in addition to Ukrainians, there are also students from Asia and Africa who want to leave the country as soon as possible to save their lives. The transit for one and the other is not the same and, sometimes, it is more difficult to ensure the transit of students of African origin who have to wait for contact with their embassies to see how to resolve the trip to their countries of origin. There is a global problem, but with different nuances for each country in this situation.

Who were the people you welcomed before this crisis at the Arrupe House in Bucharest? Now you will also have to welcome these victims of the war in Ukraine.

The Padre Arrupe Centre, founded in 2000 by a Belgian Jesuit priest, has welcomed thousands of refugees from virtually every part of the world. In the last 8 years the majority came from the Middle East: Syria, Sub-Saharan Africa, Morocco, Tunisia, Kurdish population from four different countries (Iran, Iraq, Syria and Turkey). But there are also Vietnamese and people from Sri Lanka, from Colombia, who complete the picture of refugees with a new reality for Romania: the reality of economic migrants. People who do not leave their countries of origin for reasons such as war, famine or natural calamities, but for lack of vital resources.

Here we offer shelter to people who are waiting for a response from the Romanian State and live for a few weeks, a few months or a couple of years in a transitional regime. In addition to a humanitarian reception, which is an alternative to detention on Romanian territory, we offer legal and social advice and open our space for cultural associations. We offer a place of coexistence at a social and cultural level and training courses and workshops in Internet, Romanian and English.

There is hope against any despair. We are very discouraged by what we hear from people coming from Odessa and southern Ukraine. But despite this discouragement, we hope that the conflict will not escalate into nuclear war. And we hope to see an end to this humanitarian crisis that affects millions of people.

What would you ask to those reading this interview?

That with their help they have been present on a border that they could not even see until now. It seems to me that a Europe in crisis is much smaller, because it is much more supportive. I sincerely appreciate this generosity that reveals us brothers even without knowing each other. We keep going. Thank you.

story
One Proposal: The Coordinated Jesuit Response to the Ukraine Crisis 29 Aug 2022