JRS/USA: A Jesuit Brother on Accompaniment

Jesuit Brother Matt Wooters recently sat down with Jesuit Refugee Service/USA to talk about his experience with accompaniment throughout his Jesuit formation. From spending time with young migrants in a Guadalajara shelter, to his position as a school social worker, Wooters has worked to be in proximity, as Pope Francis calls it, with people our society often tries to leave out.

When it comes to accompaniment, Wooters explained, “it is all about relationships…to accompany someone, you have to know them.” To know someone, we also must know ourselves.

“Understanding yourself is the first part,” he said, because it allows a person to “know [their] areas of limitations or fears or selfishness…and step beyond them.”

Wooters also emphasized the importance of leaving preconceived notions or judgements at the door.

“I’ve never been in a position where it was either put my nephews on a train or have them be shot, so I’m not really in a position to judge,” Wooters said. “My job was to greet them, care for them, love them, give them food and clothing, and connect them on calls back to their homes.” 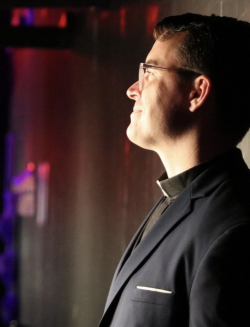 While Wooters was studying social work in graduate school, he worked with people experiencing homelessness and forced displacement, but he realized it was always within the context of the United States. Understanding the need to meet migrants where they were, he felt called to go to Guadalajara where he worked for six months in a migrant shelter.

He recounted the power of the relationships he was a part of in the shelter. Mostly young men, he was surprised to see more teenagers represented than any other age demographic. Most of the people in the shelter were from Honduras and Wooters himself being a Maryland native, he noted how they were all new to Mexico. “We were accompanying each other in our own way,” he said.

On returning to the United States, Wooters knew he wanted to continue working with migrants. He started a new position as the school social worker at Nativity Jesuit Academy, a K – 8 school on the south side of Milwaukee. It is a Latino serving school and Wooters quickly realized that many of his students were from Guadalajara.

Lean into your vocation and do it proudly.
Br. Matt Wooters

He was able to engage with them in closer proximity because of his experience with the specific variety of Spanish and slang used in Guadalajara.

“I am so grateful to have worked in a Latino serving setting after working in Mexico,” Wooters said.

Most recently, in response to the increased number of people fleeing the war in Ukraine, Wooters hosted a fundraiser to support Jesuit Refugee Service offices working in the Eastern European region.

When Russia invaded Ukraine, Wooters struggled with his inability to be near the people suffering because of the war. “I felt so removed…I was drawn to the immediacy of doing a fundraiser where every dollar someone donated was going towards basic needs,” he explained.

In 2021, a lifelong swimmer and athlete, Wooters completed an eight-mile swim from Loyola University to the Navy Pier in Chicago to raise money for Cristo Rey Jesuit High School’s 25th Anniversary. It was a huge success, raising over $25,000 for the school.

This year, Wooters set his sights on completing a half iron man with the goal of raising money for JRS. Ultimately, Wooters realized he was not in the place mentally or physically to train for such a demanding event, but this did not stop friends and strangers from rallying together to donate $13, 611.81, 90% of his goal of $15,000. This money will go towards helping provide food, water, shelter, education, and mental health support to those forced to flee their homes in Ukraine.

For those curious about or interested in accompaniment, Wooters suggests starting small and networking in your own neighborhood. He noted how the weight of global calamity can leave us feeling useless in the face of injustice “but you can love the woman who needs groceries…and hang out with her and bring her the eucharist…we can all do that now. That’s kind of where the gospel is lived.”

Each person has their own vocation and way of accompanying others. Wooters invites everyone to figure out “what your passion is” and how can you live it out. “Lean into your vocation and do it proudly.”

To learn more about JRS’ Migrant Accompaniment Network in the United States click here and to get involved with our work in Ukraine follow this link!