On December 20th the Taliban barred all women and girls from attending high school and university in Afghanistan. This sweeping ban is the most recent, egregious effort to prohibit women from exercising their human rights and participating in Afghan society since the regime regained power last year.

JRS understands that education saves lives and fosters agency for all people, especially those who are working against systems of extreme oppression. It is imperative to raise awareness about the situation in Afghanistan and support legislation that will help those trying to flee.

Mina is a human rights activist and student at Arizona State University. She evacuated Afghanistan when the Taliban took over Kabul in August 2021. Since moving to the US, she has consistently advocated for her family and fellow Afghans by rallying her community in Arizona and others across the country. In 2022, she participated in JRS/USA’s Advocacy Day, where she described her own experience fleeing Afghanistan in 2021 to members of the US Congress.

Mina and her family are members of the Hazara ethnic and religious minority in Central Afghanistan. Most Hazara people practice the Shi’a sect of Islam while the majority of Muslims in Afghanistan practice the Sunni sect. The Hazara community is also known for their more progressive views on society,  particularly regarding the role of women.

In the 1990’s, the Taliban exerted extreme cruelty and destruction on the Hazara community. In a few years, they massacred thousands of Hazara people, stripped all political protection, and prohibited Hazara women from going to school and participating in society at large.

Though suicide bombers and discrimination still threatened Hazara people since 2001 attacks from the Taliban and extremist groups like ISIS – K lessened as Afghanistan’s western-backed government was in place. In these 20+ years, many young Hazara people enjoyed going to school, playing sports, traveling, and looking towards their futures.

Mina said that her family instilled in her the importance of going to school and pursuing her ambitions.

At the family dinner table, there was always room for discussions and conversation. She and her sisters could voice their opinions and respectfully challenge their parents’ views, which helped her and her sisters find their own voices and strengthen their advocacy skills.

She said such a space for discussion helped equip her with the tools for her future and instilled her with confidence as she has encountered opportunities in higher education. “It made me more ambitious to pursue and reach my dreams,” Mina said. When the Taliban prohibited women and girls from attending secondary school, her sisters and cousins began gathering in secret to study together.

Growing up, there were times that her mother was the only source of income while her father was unable to find work. This experience helped Mina expand her idea of gender roles. “It was visible to me that Mom could go to work and Dad could be there to help with everything at home.”

Now, her family has fled the country and the Taliban is actively looking for her father.

On September 30th, 2022, a suicide bomber walked into the Kaaj education center in Kabul, Afghanistan. Nearly 500 students were taking a practice entrance exam for Kabul University when the explosion went off. In the female student’s section, 53 people died–most victims young, Hazara women.

Now, all women and girls are explicitly prohibited from pursuing an education, they cannot travel without a male chaperone, and have no representation in the government. Still, with resilience and hope, they are finding ways to educate each other in secret. 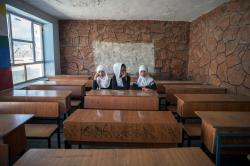 The hashtag #StopHazaraGenocide has gained global traction. Mina said over 140 cities around the world have stood up in protest of the persecution of Hazara people. But, as violence continues and human rights violations worsen against Afghan women, the fight for Hazara and Afghan women protection is far from over.

“The US must do everything in its power to offer protection and security for as long as necessary to those requiring our assistance” said JRS/USA Executive Director in response to the crisis in Afghanistan.

One way that Americans can help Mina and other Afghan women in their advocacy efforts is by sending messages to their representatives to support the Afghan Adjustment Act. The legislation supports people fleeing violence and persecution in Afghanistan and provides them with proper legal status in the US.  To learn more about how you can help JRS efforts to support Afghan refugees visit this page.

To advocate on behalf of refugees, join us for the 2023 JRS/USA Advocacy Day in March.